In the Dragomeir Series Book Three, “Egg of the Amphitere”, some of the more unusual visitors to Mt. Drago were the Savants. They entered Mt. Arcadia first, and impressed with three of the Amphitere Dragons, after having just appeared in the common area. Within minutes they disappeared and went to Mt. Drago to present information to Queen Mother. It was not received well.

The Savants were an ancient race of diminutive people that hailed from Oblivion. Standing only four feet tall and incredibly frail, they had managed to impress with the most violent of the species of dragons, the Amphiteres. The people of Mt. Drago only saw three of this race, all female, although Tanis had a difficult time determining their sex until an introduction was made.

All three of them wore floor length white smocks, were bald, and only spoke by writing their messages on a series of Post it Notes.

Seemingly able to move through both time and space, these unusual females quickly angered Queen Mother into a bold show of power to establish who was in control . . . and who was not.

The leader of the Savants called herself Caesarea Maritima (Also a city in Israel), and although very old, had the body of a child. The other Savants looked identical to Caesarea making it difficult to tell them apart. Their existence in our world was made possible due to the Hearths they controlled, and an underlying hatred for the Dark Lord.

The Savants can be found in my forthcoming book, “Egg of the Amphitere.”

Visit me to find out more at – www.solitaireparke.com

Where is Caesarea Maritima? 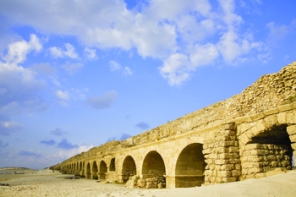 In my forthcoming book of the Dragomeir Series, “ Egg of the Amphitere,” one of the key points is the location known as Caesarea Maritima. It was one of four Roman colonies for veterans in the Syria-Phoenicia region created by the Roman Empire. The ancient Caesarea Maritima city and harbor was built by Herod the Great about 25–13 B.C. It was named in honor of Caesar Augustus.

Caesarea was built like a model Greco-Roman city and laid out on a grid. There was a forum, theatre, temples, public baths, paved streets, and an elaborate villa that probably belonged to Herod himself. Giant twin aqueducts brought fresh water from Mt. Carmel, and formed part of an elaborate water and sewer system. But the focal point was a temple dedicated to Augustus.

Caesarea’s strategic location placed it at the juncture of important trade routes. In the harbor, Herod’s engineers constructed two huge breakwaters, lined with warehouses. At the end of the southern breakwater stood the lighthouse, whose fires burned 24 hours a day. Six enormous bronze statues marked treacherous sandbars. To ships coming in from sea, the sight must have been truly impressive. The city had been populated through the late Roman and Byzantine era. Its ruins lie on the Mediterrean coast of Israel, about halfway between the cities of Tel Aviv and Haifa, on the site of Pyrgos Stratonos (“Straton’s Tower”).

A hearth is discovered there and plays an important role in the near destruction of Mt. Drago, the mountain around which my story is based. (In general in ancient Greece, each state, city or village possessed its own central hearth and sacred fire, representing the unity and vitality of the community. The fire was kept alight continuously, tended by the king or members of his family.)

Tanis finds not only a hearth in the ruins, but also the remains of one of the original prytaneums. (A prytaneum was a public building or hall in an ancient Greek city containing the state hearth and serving as the place of meeting and dining for the prytanes or priests, and sometimes of official hospitality for distinguished citizens and visitors.) Further study shows him the convergence of multiple Ley Lines and a portal to Oblivion.

I chose the hearth at Caesarea Maritima because similar structures also show up in other parts of the world where Ley Lines are present. What better way for the book’s characters to travel on and off the Provinces?

In the real world, Caesarea Maritima is open to the public and is certainly one of the oldest settlements, dating back over two thousand years.

Want to find out more?  Check it out here:   https://en.wikipedia.org/wiki/Caesarea_Maritima

A site of writings, musings, and geek culture, all under one domain!